​Manchester City will meet West Ham in the Women's FA Cup final after an injury-time own goal knocked holders Chelsea out in heart-breaking fashion.

In a close encounter between two of the best sides in the Women's Super League, the semi-final clash between City and Chelsea looked destined for penalties. 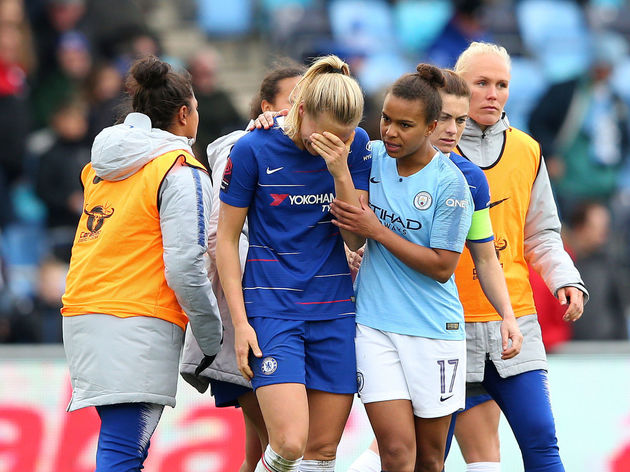 The Blues enjoyed the better of the chances during the game, with both Fran Kirby and Erin Cuthbert seeing their strikes come off the woodwork.

But with the game deep into stoppage time, ​Chelsea's Magdalena Eriksson diverted Demi Stokes' cross over her own goalkeeper, and into the back of the net, to send the current cup holders crashing out.

91. GOAL GOAL GOAL! Stokes' cross is met by Eriksson who turns it into her own net! Unbelievable scenes at the Academy Stadium!

​City, who last lifted the trophy back in 2017, will face West Ham in the showpiece finale after another dramatic ending in the other semi-final tie.

@westhamwomen are THROUGH to the FA Cup FINAL! The passion is REAL ♥️ pic.twitter.com/ljy8mDaney

Fara Williams then had the opportunity to restore the Royals' lead but saw her spot-kick come off the post, as ​West Ham survived despite Reading being denied two strong penalty shouts.

With the game locked all square at 1-1 after 120 minutes, it was up to a penalty shoot-out to decide a victor. With both sides missing two penalties apiece, the game went to sudden death, with Jade Moore's failed attempt seeing South Korea captain Cho So-hyun fire the Hammers into their first ever FA Cup final.

Thank you for your fantastic support today!

We're going to the @SSEWomensFACup Final!

The final, which will take place at Wembley Stadium, is scheduled to take place on 4 May with a 17:30 kick-off time.