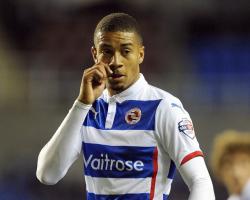 The 23-year-old defender was at the centre of one of Tuesday's more interesting moves when he signed a five-year deal with Barclays Premier League champions Chelsea before being loaned back to the Royals for the remainder of this season.

Republic of Ireland midfielder Quinn was on duty with his country as the deal went through, and he was quick to wish Hector the best of luck for what may lie ahead.

He said: "It's a great move for Michael

I think he's been loaned back to us as well, which is good for our squad.

"But it's a really good move for him, at such a young age as well, to go to Chelsea, a massive club like that, and I'm sure he'll do all right

Good luck to him."

Asked how good a player the Jamaica international is, Quinn admitted: "I haven't seen too much of him

Paul (McShane) has been playing in the team, and Anton Ferdinand - and he hasn't really got that much game time, so I haven't really seen too much of Michael.

"But we'll see how he develops over the next year or so."

If Hector got his dream move, the shutters came down for Ireland striker Jon Walters as he remained a Stoke player despite concerted interest from Norwich and Leicester, among others.

The 31-year-old was training with his international colleagues in Dublin on Wednesday morning, perhaps to the disappointment of Canaries Robbie Brady and Wes Hoolahan, but to the relief of fellow Potter Marc Wilson.

Wilson said: "He's a great lad and a big part of the Stoke team and the dressing room, so I'm glad he's still a Stoke player, anyway.

"I was sending him a few text message just to see how he was getting on, but obviously Stoke couldn't see eye-to-eye with any other clubs to get someone in to replace him, so it looks like Jon's a Stoke player for the rest of the year.

He's getting on a bit now and I think he was just trying to secure his own future for his family, so I don't see anything wrong with that.

"But he's a smashing guy to have around the place

In the dressing room, on the pitch, you know you are going to get 100 per cent with his attitude, determination - and he scores goals, so he's a great guy to have around.

"He's a big part of the Irish dressing room as well, a great character

All the things I said before, I could say them a million times.

"That's Jon Walters in a nutshell

He's a great guy to have in the camp."