Reading manager Kelly Chambers has called for more support from the FA Women's Super League to help referees improve the standard in the professional game.

Her pleas come after she brandished the performance of referee Rebecca Walsh 'one of the worst' she'd seen on BBC Radio Berkshire after her side's 2-1 defeat to West Ham on Wednesday.

A crowd of over 2,000 turned out to watch Reading drop below their opponents in the table at the Madejski Stadium, as Alisha Lehmann's double was enough to hand West Ham a two goal lead, with Fara Williams' second half penalty proving only a consolation for the home side.

Chambers said, via the ​BBC: "I actually think that was one of the worst I've ever had in football. Her performance was poor for both sides. There's a lot of stuff she missed that could've made the game different. Unfortunately, this is a constant problem, it's just the first time I've spoken out about it." 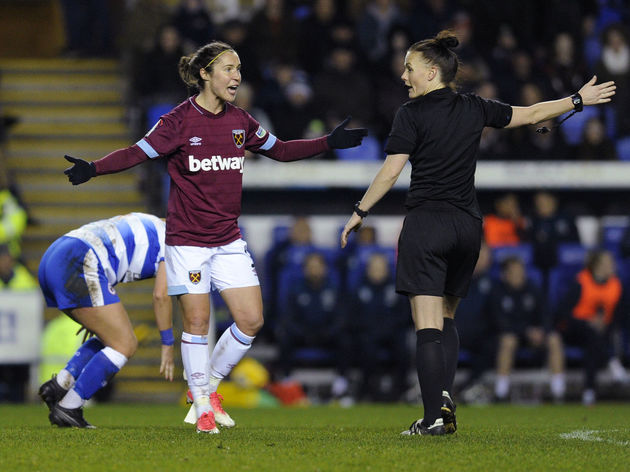 As a result, Chambers wants to see additional help provided to referees, believing it's needed to keep the standard up to par with the quality of the league itself.

She added: "It's a case now that the game's growing, we're professional and we need to do something about the officiating to bring that up to speed and ensure referees stay up with the speed of the game to make decisions.

As always, your support is much appreciated. Thank you to all the fans for coming tonight 👏🏼 pic.twitter.com/KNDYxwLTrr

"I know the FA are trying to do something about it and they're using this season to do it. But it's spoiling the season."