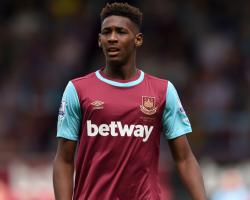 Royals chief executive Nigel Howe told the club's official site: "Reece was a player who was wanted on loan by a number of clubs and we are absolutely delighted to have secured his services for the remainder of the season.

"He is young, but hungry for success and I am sure he will prove an excellent addition to our squad and learn a lot during his spell under Jaap Stam at Reading."

He then became the second youngster Premier League starter when he helped West Ham beat Arsenal 2-0 in August 2015.