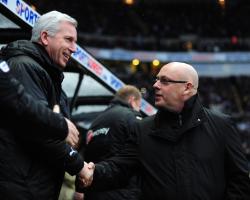 McDermott's Royals side come up against Pardew's Palace on Friday night for a place in the FA Cup semi-finals.

Yet in 2000 it was Pardew, then manager of Reading, who handed McDermott his big break after a chance meeting at a reserve game.

And McDermott claims he would never have become a Premier League boss - having guided Reading to promotion during his first stint in charge - were it not for the man he now sees as a good friend taking a chance on him.

"We were at Brentford watching a reserve match and got chatting," revealed the 54-year-old former Arsenal midfielder.

"We are definitely friends

He's a great guy and if it wasn't for him - and he'll probably tell you himself - I wouldn't be here now."

As a rookie manager Pardew led Reading into the Championship and, according to the current boss, laid the foundations for subsequent promotions to the top flight under Steve Coppell and then McDermott.

However, he tends to receive a frosty reception at the Madejski Stadium following his drawn out and acrimonious departure to West Ham in 2003.

"All I know is that he did a great job at Reading and he's a good friend of mine.

"He put a team together that Steve Coppell carried on, he brought us to where we are now and what we are trying to do is carry on from the people before

He was a big part of that."

Palace have hit the buffers recently , with the FA Cup victory at Tottenham in the fifth round the only bright spot amid a run of 12 Premier League games without a win

Reading, meanwhile, are unbeaten at home in 2016, but McDermott is taking nothing for granted.

"Alan's record speaks for itself," he said

He's gone back to Palace and done a really good job, like he did at Newcastle, West Ham and Southampton

"This is a Premier League side coming to a Championship club

We know they have threats, we know it wasn't long ago they were winning lots of games and don't forget they went to White Hart Lane, played one of the top teams, and won."