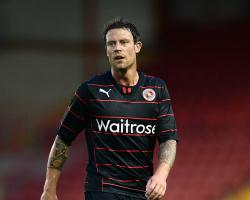 Reading 3-0 Rotherham: Match Report - view commentary, squad, and statistics of the game as it happened.Reading see off Rotherham Reading ended their desperate run of poor form in the Championship with a comprehensive 3-0 victory over Rotherham at the Madejski Stadium.Jamie Mackie gave Reading the lead midway through the first half with a precise finish and a second-half brace from top scorer Simon Cox finished off Rotherham, who offered very little all match.Reading manager Nigel Adkins made five changes from the side that lost 3-0 at Blackburn on Saturday, desperate to inject life into a side who had won only once in eight league matches and taken five points from a possible 24.Adkins brought in Anton Ferdinand, the former QPR centre-back, for his debut

Ferdinand had not featured, due to a hamstring injury, since signing from Turkish club Antalyaspor on a free transfer during the summer.Ferdinand had little to do in a tame opening to the game, in which neither side were able to muster any clear opportunities

Rotherham, beaten 3-0 at home by Middlesbrough on Saturday, probed constantly but without any serious threat.Reading finally created the first chance when Jordan Obita sped away down the left flank and crossed low into the Rotherham area

However, the onrushing Glenn Murray narrowly failed to make contact with it.Rotherham, unbeaten in five matches prior to losing against Middlesbrough, replied quickly, with Matt Derbyshire testing home goalkeeper Adam Federici with a firm header from a Paul Green cross

Green also drove straight at Federici from 25 yards soon after.Reading soon upped the tempo and went ahead in the 29th minute

Stephen Kelly crossed from the right and Mackie, after a heavy first touch, recovered well to turn smartly and curve a fine shot past Rotherham keeper Adam Collin.It was Mackie's first goal for the club, having signed on a season-long loan from Nottingham Forest during the summer.It signalled concerted home pressure up until half-time, with Cox forcing an agile save from Collin with a fierce shot from a Kelly cross.Mackie almost added a second, only to be denied by Collin's flying save, and a powerful Oliver Norwood free-kick from wide out on the left thudded against the Rotherham crossbar with Collin beaten.Reading continued to dominate after the break, with Cox having a shot blocked from close range.Rotherham responded briefly, when Federici saved a direct header from Kari Arnason, but Reading settled the game with two goals in nine minutes.Mackie ran through the tiring Rotherham defence to set up Cox, who finished precisely past Collin in the 55th minute.Then Mackie again played the provider, in the 64th minute, for Cox to swivel and fire home a clever cross-shot for his seventh goal of the season.Reading ran down the clock thereafter, with Rotherham unable to pose any problems in a poor display