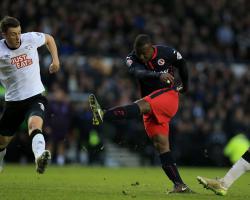 Derby looked the better side until full-back Stephen Warnock was sent off for a second yellow card in the 39th minute but Reading made the advantage count.

Hal Robson-Kanu's goal was cancelled out by Darren Bent but Yakubu, who was signed as a free agent during the January transfer window but has cost English clubs a total of more than ÃÂ£25million in transfer fees, netted the winner.

Derby's promotion ambitions dictated seven changes but there was no lack of cohesion from them and it took a good save from Adam Federici to keep out winger Simon Dawkins' snap-shot within 90 seconds of the kick-off.

Next, Rams defender Richard Keogh was inches short of stabbing home a free-kick from Omar Mascarell but after a quarter of an hour Reading hit back to win a free-kick that let in Simon Cox for an angled shot that rattled the near post.

Derby swept back upfield for Dawkins to lay on a shooting chance that Jeff Hendrick fired over the bar and then Federici turned away a blistering low shot from Jesse Lingard, making his debut on loan from Manchester United.

The keeper then produced an even better reflex stop to beat away a powerful point-blank effort from Bent as Derby continued to press.

A long-range shot from Mascarell was drilled straight into the goalkeeper's hands but a rapid break caught Derby undermanned at the back and Cox latched on to a header from Pavel Pogrebnyak to fire a thunderous shot just too high from the right of goal.

After so much Derby pressure, the odds turned in Reading's favour when Warnock was sent off in the 39th minute for a lunge that left Jamie Mackie rolling in pain and produced a second yellow card from referee Craig Pawson.

It could have got worse for Derby when a shot from Danny Williams bounced up against Keogh's raised hand off his thigh to prompt penalty claims but the referee waved play on.

Cox had a powerful shot blocked as Reading tried to make their advantage count and their extra man paid off in the 53rd minute when a rapid counter-attack ended with the same player escaping on the right to deliver a clever pass for Robson-Kanu to curl left-footed inside the far post.

Reading, who had previously lost to Derby in the Championship and the Capital One Cup this season, stayed in front for only seven minutes and it was the in-form Bent who scored.

A right-wing cross was just too strong for Bent to meet but the ball was crossed again from the left by Craig Forsyth and this time the England striker made no mistake from close range - his fifth goal in as many games since joining the Rams on loan from Aston Villa and his ninth in his last 10 FA Cup appearances.

Mackie fired wide from 12 yards after in what was becoming a rip-roaring cup tie and nine minutes from time Reading got back in front when a Derby attack fizzled out and left them short-handed at the back.

Cox swept the ball straight through Derby's floundering back line and there was substitute Yakubu to underline his quality by powering forward and firing home a clinical left-footed shot from the edge of the box.