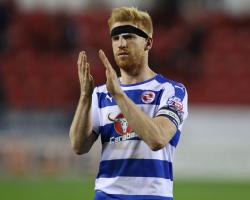 McShane made over 130 appearances for Hull before heading to the Madejski Stadium on a free transfer in July, but insists there will be no room for sentiment as managerless Reading bid to halt a three-game losing run against the third-placed Tigers

"I was there for six and a half years, so I know a lot of people up there," the 29-year-old Irish defender told Reading's official website

"I'm looking forward to seeing everyone, but we're there for one reason - that's to try to win the game

Hopefully we can do that

"They have got a few new players, but I know pretty much all of them.

"They're a good group of players and I enjoyed playing with them, and they are a good set of lads

It will be good to see them, but it's going to be strictly business."

Reading caretaker boss Martin Kuhl, who will take charge for his second game following Steve Clarke's sacking on December 4, has urged the board to name a permanent successor as soon as possible in a bid to halt the club's recent slide

The Royals were in second place two months ago, but one win and five defeats in their last nine matches has seen them slip to 12th.

"We're having a bad time at the minute," McShane added

"I'm still confident that we can turn it around and I'm still positive that we can have a right crack at it this season."

McShane returned to the side after a facial injury in Saturday's 1-0 defeat at Preston and is expected to start again, but midfielders Stephen Quinn (knee) and Aaron Tshibola (ankle) remain doubtful

They will be without injured skipper Michael Dawson, ruled out for up to six weeks with knee ligament damage sustained at the weekend, and Alex Bruce (back), but winger Robert Snodgrass could make his first start of the season after overcoming a dislocated knee