Reading up and running under Brian McDermott 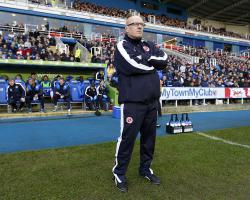 McDermott returned to Reading this week, replacing Steve Clarke, after leaving in 2013 to lift the Royals up to 11th in the Sky Bet Championship

Afobe's 16th-minute goal, after Ross Wallace had fouled Matt Doherty, had Wolves dreaming of just their third win in 12 games but Forestieri netted a spot kick of his own four minutes later when Lucas Joao went down inside the box

Norwich loanee Hooper then finished the visitors, who remain 17th, off in stoppage time when he latched onto Atdhe Nuhiu pass