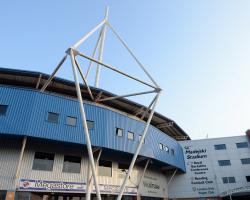 The Royals admitted breaking rules which prohibit any individual or legal entity having an interest in more than one club.

In a statement on Monday afternoon the Football League revealed that Reading, who were struggling financially after being relegated from the Premier League in 2013, had borrowed more than ÃÂ£16million from a company which also held an interest in three other clubs.

Reading's ÃÂ£30,000 fine has been suspended until May 31, 2016, after which it will lapse provided the club are not in breach of any financial regulations

The Football League statement read: " In August 2013, Reading borrowed the sum of ÃÂ£10.5million from Vibrac Corporation, a company registered in the British Virgin Islands, which was followed by a further loan of ÃÂ£5.6million in May 2014

"The Football Disciplinary Committee found that, at the time, Vibrac also had an interest in three other professional clubs, albeit in the Premier League, in contravention of Football League regulations designed to protect the integrity of league competition

"All sums owed to Vibrac by Reading were repaid following the club's takeover by its current owners in August 2014.

"Following Reading's full co-operation with the process and having admitted the charge, the FDC agreed to suspend the full amount until May 2016 with the club also being ordered to pay the costs of the Football League and the Commission."