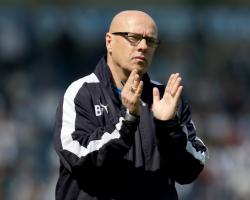 McDermott returned to the Madejski Stadium for a second spell in charge in December 2015, but was unable to repeat the success of his initial stint at the helm when he led the club to promotion to the Barclays Premier League.

Reading finished 17th in the Championship this season and ended the campaign with a seven-game winless run which included six defeats.

A statement on the club's official website, readingfc.co.uk, said: "After careful consideration, the board of Reading Football Club have taken the difficult decision to relieve manager Brian McDermott of his duties.

"We would like to sincerely thank Brian for all his hard work since his return to the club in December 2015 and wish him well in his future career.

"The board of Reading Football Club will now undertake a rigorous recruitment process over the next few weeks to identify the right man to lead this club forward and into the 2016-17 season.

"The club will make a further announcement to our supporters in due course."

After managerial roles at non-league Slough and Woking, McDermott joined Reading in 2000 as chief scout where he worked under then-manager Alan Pardew.

He has a spell as caretaker boss during the 2009-10 season following the departure of Brendan Rodgers before getting the job on a permanent basis and steering the club to a ninth-place finish in the Championship that year.

In his first full season in charge he took Reading to the play-off final where they were beaten by Swansea but the Royals immediately bounced back from that Wembley disappointment by winning promotion as champions in 2011-12.

Reading lasted just one season in the Premier League and McDermott was sacked in March 2013 following a run of four successive defeats.

He returned to Reading after a brief spell at Leeds and won just nine of his 30 games in charge, culminating in his dismissal - for the second time - on Friday morning