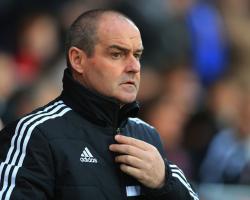 Twelve months ago Clarke was axed by West Brom, who remain the only Barclays Premier League club the 51-year-old Scot has taken charge of on a full-time basis, but he has now returned to management in the second tier after signing a two-and-a-half-year contract with the Royals.

He takes over a side who are 16th in the Championship table following Saturday's 6-1 thrashing at Birmingham, a result which spelled the end of Adkins' tenure at the Madejski Stadium.

Speaking to the Royals' official website, Clarke said: "I am absolutely delighted to be joining Reading Football Club and I look forward to helping the club move in the right direction.

There is real potential here and hopefully exciting times ahead for the supporters."

While Clarke has just one permanent managerial job on his CV, he does have an extensive background in coaching having worked as an assistant at Chelsea, West Ham and Liverpool.

He was given his maiden head-coaching position at the Baggies and enjoyed success in his first season, guiding the Midlands-based club to their highest-ever Premier League finish of eighth.

However, Clarke's men toiled at the start of the next campaign and, after winning only seven of their 34 top-flight games in 2013, the Scot was sacked.

"He comes with a CV of the very highest order and I look forward to moving back up the table with him in charge," Madejski added

"It has been a difficult period for all concerned, but now we can look forwards

Nigel Adkins worked tirelessly to achieve success, sadly it did not work out for him but we wish him, his family and staff well for the future.

"Now we look forward to a new era under Steve's stewardship and I for one am excited about this new beginning."

Clarke will take charge of his first game this weekend when Reading entertain Watford.