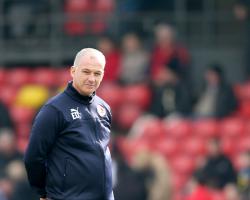 The former Republic of Ireland Under-21 international, who also played for Birmingham, West Ham and Exeter, joined the Royals in 2004.

Dolan, who also took charge of Reading's first team as caretaker boss for one game against Manchester United at Old Trafford in 2013, died of cancer on Monday

A statement on Reading's official website read: " It is with the deepest and most profound sadness that Reading Football Club regretfully inform its supporters of the passing of Eamonn Dolan, who tragically lost a brave battle against cancer on Monday evening at the age of 48

"Our sincere condolences go out to his family and many, many friends

Eamonn was, and will forever remain, one of our own."

And most notably, his love for this club was overwhelming

"That love was mutual

Everyone who worked with him at Reading respected and admired a man who will be desperately missed by staff, managers, coaches and players - both past and present throughout his 12 years as a Royal."

Dolan's playing career was cut short due to testicular cancer in 1993 when he was at Exeter, who he later went on to manage

During his time as Reading's academy boss, 32 players progressed through the ranks to make their first-team debuts for the club

Reading fans showed their support for Dolan with a minute's applause in the the opening home match against Leeds last season, soon after he had started chemotherapy following surgery to remove a tumour from his bladder