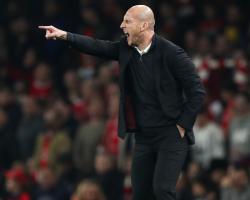 Stam made 79 appearances in all competitions for the Red Devils between 1998 and 2001, which included winning the FA Cup in his first season, but he left in controversial circumstances.

The Dutchman recalled in his autobiography that Sir Alex Ferguson, then United's manager, met him at a petrol station, got in his car and told him he had to be transferred.

Ferguson and the club strongly denied that at the time, insisting it was purely a football decision to sell him to Lazio, but the Scot did admit in 2013 it had been a mistake to let Stam go.

"It tells you something in how I performed when I was there and the relationship I had with the fans.

"I've never been back in a proper game - I've been back for the games we played for Soccer Aid - but it'll be good to be back in front of the United fans in a situation like this.

"But it's not an opportunity to say a proper goodbye to them, because hopefully I'll be back again as a manager coming up against them in the future."

Even aside from the United connection, Stam sees it as a chance for his Premier League hopefuls to go up against one of the country's top clubs.

"It's always nice for a manager and his team to play against teams like Manchester United to see what you can do, what you are capable of," he said

"Then you can see where you can improve as a player and how the team can be better going into the second half of the season."

He said: "He's the type of manager who wants to win the league, the Champions League, the FA Cup, everything! That's what I like about him.

I still need to learn a lot, I need to improve myself as a manager

I can learn a lot from him in how he works

We want to show ourselves at Old Trafford against a side like Manchester United.

So we know it's going to be difficult.

"But we've got confidence as well

We believe in ourselves

We believe we can do something

"You need to enjoy it but you'll enjoy it even more if you get a result.

"The thing is if you go into these games, you enjoy them and you play against a very good side, but it doesn't mean if you play a side like that at Old Trafford you're going to lose straight away.

"You need to give it your best shot, work very hard and be confident in how you play

And then I'm sure we can do well against them.

"They will probably want to finish the game as quickly as they can, so we need to be prepared."