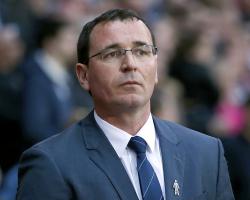 Bowyer, 44, was dismissed by Blackburn on November 10 after almost three years in charge and feels he has plenty to offer.

Asked if he would be interested in the Reading vacancy, Bowyer told Press Association Sport "Of course, I'm looking to get back as soon as possible."

Bowyer, son of former Nottingham Forest striker Ian, added: "Football and management has been a huge part of my life, all my life."

Clarke insisted his decision to hold talks last month with Fulham over their vacancy had not affected the players and although Reading have won only one of their last eight league matches, Bowyer did not expect the Scot to lose his job.

"I was surprised to see that had happened," Bowyer said

"But when you consider the number of managers who have lost their jobs this season, it shouldn't be a surprise

Football is a brutal industry

"But Reading are a very good football club, it has a lot of history and the job would appeal to a lot of people because of its tradition.

"I've already got managerial experience in the Championship, two and a half years, so if the right opportunity comes along you've got to be putting yourself forward

"Managing is certainly something I want to continue doing."

Bowyer, currently in Spain to watch both Athletic Bilbao versus Malaga and Real Sociedad against Eibar on Sunday, holds no grudges against his former club Blackburn.

"What happened, happened," he said

"But I'm delighted to see them come out of their (transfer) embargo, it gives the club a chance

"A lot of work had gone into that and I was involved in those conversations, so I know what's gone on.

"They now have the chance to kick on because it's so difficult to progress when working under those restrictions."

Following Clarke's sacking, a statement on the Royals' website read: ''The board of Reading Football Club have this morning relieved manager Steve Clarke of his duties

''Following Thursday night's defeat at home to QPR, added to a recent run of poor form which has seen the team pick up just one win in the last eight Sky Bet Championship fixtures, the board feel that a change in manager is now necessary.''

During his year in charge Clarke, 52, guided Reading away from relegation trouble and to an FA Cup semi-final, where they were narrowly beaten by Arsenal

The Royals looked primed for a promotion push after a fine start to this season, but their recent slump has seen them slip to ninth