Federici will bounce back - Clarke 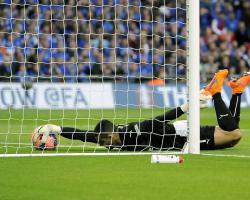 The Australian goalkeeper let a tame Alexis Sanchez shot slip through his grasp in the sixth minute of extra-time as the Royals were narrowly beaten 2-1 by Arsenal in Saturday's FA Cup semi-final.

It was a cruel blow for Federici, who had kept the Gunners at bay with a string of fine saves, but Reading boss Steve Clarke is confident the 30-year-old will bounce back.

"It's the life of a goalkeeper," Clarke told Reading Player

"It's much better in a game like that, that if you have to lose you lose to a moment of brilliance

That wasn't the case

"As I said after the game, we win together, we lose together

Adam is a strong character

"On Wednesday night when we play Birmingham, he'll be typical Adam Federici - one of our best players."

Federici will come up against an in-form striker in the shape of Clayton Donaldson.

The 31-year-old former Brentford frontman is among the favourites to be named Blues' player of the year after hitting 15 goals this season, and manager Gary Rowett admits he is "almost undroppable".

"He's got a little bit of everything

He's decent in the air, he's got very good pace, he holds the ball up well for others, he's got a little bit of physicality and he scores goals

I think he's the reason why we've got some very good players like Lee Novak, Wes Thomas and Nikola Zigic, who have not played very much

"I feel sorry for them but the reason is Clayton at the moment has been almost undroppable with his recent performances."