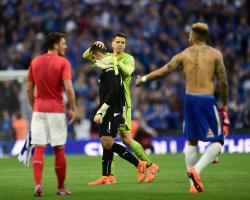 With the game finishing 1-1 after 90 minutes, the Australian inexplicably let a tame Alexis Sanchez shot slip through his grasp in the sixth minute of extra-time and could only watch on as it trickled over the line, allowing the Barclays Premier League Gunners to book a second successive final appearance.

The 30-year-old, who was "inconsolable" after the match, has received unwavering support from his manager and team-mates but issued an apology to Reading's fans.

"Just like to say thank you for all your messages and how sorry I am for my mistake , we gave our all and deserved to at least take it pens," he posted on his official Twitter account.

" It's part of being a goal keeper and I'm sure it will make me stronger ! Thank you again for your amazing support #readingfc."