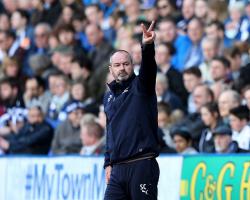 It has been 88 years since the Royals last reached the last-four juncture and the SkyBet Championship side travel to Wembley facing the unenviable task of overcoming in-form Arsenal.

Reading are striving to make the FA Cup final for the first time in their history, leading to excitement understandably building in Berkshire - if not the club's Hogwood Park training ground.

Clarke, a winner as player and coach at Chelsea, has told his players not to get caught up in the occasion, with progression the only objective.

"I think when you go through to semi-finals, the only way to enjoy it is to win the game," the Reading manager said.

"You can't go to Wembley and play the occasion

It is not about playing the occasion, we're playing Arsenal.

We have to go there focused only on what happens on the pitch.

"The supporters can go and enjoy the day, that's their little reward for a cup run.

"For us, it is to go there with a mentality that we are there to do a job and if we do that right we can go through."

Clarke is confident his players can make history on Saturday, even though few outsiders share his faith.

One bookmaker has them at 14/1 to win and Reading's manager accepts they will have to play the "perfect game" to overcome an Arsenal side on the back of eight straight league wins.

"They have terrific players

Great problems for us to solve.

"Maybe they have left their run too late to catch Chelsea at the top but certainly a good chance to finish the season strongly."

Reading have no fresh injury concerns ahead of the semi-final, with Pavel Pogrebnyak fit after a slight calf complaint ruled him out of Tuesday's 1-0 loss to table-topping Bournemouth.

Clarke felt defeat was harsh on his side, stretching a run of winless matches to five since winning the quarter-final replay against Bradford.

"Cup competitions, one-off games, we seem to have approached it with a little bit more freedom, a little less nervousness, if you like," the Royals boss said.

"I think the league campaign has been disappointing

There is sort of a feeling of doom and gloom around the league campaign this year which is never nice.

"I think that is reflected in the game (against Bournemouth), when we are knocking at the door in the last 10 minutes and knocking on the door very, very much.

"Bournemouth, because they're on a winning run, know how to get over the line and win at the moment.

"We're struggling in the league a little bit to find a way to win games, whereas in the cup we've been good.

"We've known how to win the cup games so hopefully that continues on Saturday."