Clarke- Royals must kick on 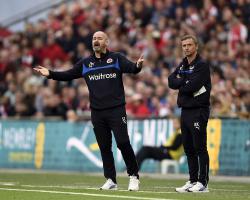 The Royals produced a battling display against the Gunners on Saturday afternoon, recovering from going a goal down just before half-time to equalise through Garath McCleary.

However, the Sky Bet Championship side were eventually beaten when goalkeeper Adam Federici spilled a low shot from Alexis Sanchez into his own net.

Reading have struggled to mount a sustained promotion challenge since relegation in 2013, the Berkshire club having previously played in the top flight from 2006 to 2008.

Clarke took over from Nigel Adkins in December and the former West Brom manager believes the foundations are in place to move forwards next season.

"I have said to the players, if they want to be back in the Premier League the year after next, then this is the type of performance they have to produce week in and week out

This is what everyone wants," said Clarke, whose side must quickly regroup ahead of the league game against Birmingham on Wednesday night.

"Reading showed me that they had the ambition, but I knew I was going into a club which was having a difficult season.

"I have put in a lot of principles, and in the past few games it is starting to come through.

"At the moment, we can't find a way to win a game, so we have to work even harder, that is the only solution.

"Hopefully between now and the end of the season, in the last four league games, we can get some wins, look to do a little bit of reshaping in the summer and then look to come back next year."

Reading have struggled for consistency in the Championship this season, where they have not won in six matches.

Nevertheless, Clarke believes the club need to be setting their targets high once again.

"We have to hold the ambition to have a much better season next year, and the season after that we can be back - we can be playing this type of game every week

This has to be the ambition for Reading Football Club," he said on Reading Player.