Clarke hits out at FA over replay 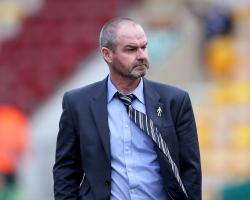 The two lowest-ranked sides left in the competition must meet again with the prize of a Wembley semi-final at stake after cancelling each other out in a gutsy goalless draw at Valley Parade on Saturday.

A UEFA rule prohibits FA Cup games being played at the same time as continental fixtures and means both clubs face a replay less than 48 hours after difficult away league games at Watford and Notts County respectively.

Clarke said: "I think the FA are devaluing the competition a little bit by making both teams play on Saturday then Monday

Why don't they just play it (on Tuesday or Wednesday) - what are UEFA going to do?

"I love the FA Cup and everything it stands for

That is the one disappointment."

Clarke hailed his side's spirit after a clattering encounter in which the visitors hit the woodwork twice through Pavel Pogrebnyak and Oliver Norwood, and which captain Alex Pearce finished with a broken nose.

But he denied they would be considered hot favourites to progress to the semi-finals for the first time since 1927 when the Royals face the Bantams for the second time on their controversial replay date.

Clarke said: "When the draw was made I said it was a 50-50 tie and I believe it is still a 50-50 tie as both teams showed today that they are quite evenly matched.

It was a physical game with no quarter asked and no quarter given and both teams just looking for that lucky bounce of the ball."

Clarke confirmed Pearce finished the game with a broken nose after an accidental clash with Bradford substitute Francois Zoko in the 87th minute.

Clarke added: "It would have been easy for him to go off the pitch but (his attitude was) wipe the blood away, straighten the nose and get on with it - a proper centre-half."

Bradford boss Phil Parkinson saw his own side's best chance pass by when Gary Liddle sent in a first-half cross which eluded everyone in the box and struck the base of Reading goalkeeper Adam Federici's post.

Parkinson believed the second-half performance in particular was deserving of more reward but said he would relish the opportunity of a replay at a club he graced with aplomb for a significant portion of his playing career.

Parkinson said: "I thought we were in the ascendency in the second period and it was always going to take a mistake or a moment of quality to settle the game today.

"You have to give Reading credit because they looked at the Sunderland game and they tightened up and did the basics really well and made it a scrappy affair at times."

Parkinson expressed his delight that his team will be in the hat for the semi-finals, adding: "We had to deal with the fact that everyone was telling us we were favourites despite the fact that Reading are in a higher division.

What people have to understand is it was as big a game for Reading as it was for Bradford today and they were really up for the game and they had to be."