Brian McDermott has no reservations about going back to Reading 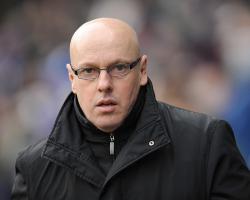 The 54-year-old signed a two-and-a-half-year contract on Thursday to replace Steve Clarke at the Royals' helm, less than three years after being sacked by the club.

McDermott had guided Reading into the Premier League and was awarded the manager of the month award in February 2013 - only to be fired by then owner Anton Zingarevich 33 days later.

Reading were relegated that year and McDermott now takes charge of a side 13th in the Sky Bet Championship.

While general consensus suggests you can never enjoy a return to former glories, the former Leeds boss said he had spoken to Howe - who has taken Bournemouth into the Premier League after going back to the south coast following a short stint at Burnley.

"I rang Eddie Howe about that," he said when asked about never going back to an old job.

"Look what has happened with Eddie last year - he won the league.

"If it didn't feel right, you don't come back for sentimental reasons, it's professional and felt like the right thing to do."

Co-chairman John Madejski said McDermott's return was the best Christmas gift he could have hoped for and said he has the backing of everyone on the board.

"Brian knows the club intrinsically well, he's been with the club a heck of a long time," he said at the unveiling.

"We've made a monumental signing

"I think he has all the credentials and the total, unanimous support of the whole board, they are pleased he is here and that makes all the difference as far as I'm concerned.

"We are very proud of getting him back, we move onwards and upwards, it is the best Christmas present we could have had, that is for sure."

McDermott announced former Wimbledon boss Terry Burton will be his new assistant at the club, with his first game back coming at home to Blackburn on Sunday.

Reading approached McDermott to replace Clarke, who was sacked just weeks after he appeared set to leave the club to take over at Fulham, and he left his position as a scout with Arsenal to seal his comeback.

"I was phoned asking would I be interested," he said.

"I had a fantastic job working at a great club

My gut feel was right just to come back

I don't think it was a tough decision, it just had to feel right.

"I do my stuff on gut feels and what feels right

It just felt right, I was working at Arsenal

Arsene Wenger is a top manager, Steve Rowley, the chief scout, is a top man - they have been first-class.

He is a class act

The club is a class act, I have watched a lot of football in the last year-and-a-half and that was important.

There aren't many places I would come back to but I spent 13 years of my working life here and I'm delighted to be back, very grateful."

With the January transfer window approaching, McDermott may now tap into that relationship with the Gunners to strengthen his squad.

"I don't know, it is nice to be able to have that conversation with people at Arsenal," he added.

"I'm sure if they can help they will, if it works for them and us I'm sure they will be very helpful."